RFW Flashback
When I heard the news of Michael Jackson's death, I immediately thought of the great musical loss we had collectively experienced. Upon turning on the television, I was barraged with reports of his oddities, eccentricities, abuses, indictments, addictions.........and - oh yea, he was The King Of Pop. Remembering that I wrote about this very subject on an old RFW post, I went back and reviewed my words from August 7, 2007. They still speak volumes for the state of our culture. While not condoning or condemning him for any of the personal events of his life, I will remember him for his unique talent and all the great songs he wrote and/or sang. Beat It Michael!
(Download only) 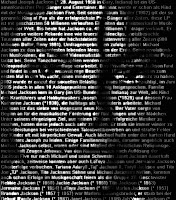 What makes people allow themselves to go through the kind of drastic changes that Michael Jackson submitted himself to endure? Non-stop plastic surgery, skin bleaching and wardrobe choices now seem minor compared to the whole pedophilia situation. The thing that really bums me out is when people talk about him now, most of the time it has nothing to do with music. The reality is that so much bad water has passed under the bridge, he can never hope to get close to where he could have or should have been. That is a real shame. His body of work can no longer speak for itself without the freaked out image creeping into view. At least for today, we will succumb to selective amnesia and dance to a set of MJ including The Jackson 5, Jennifer Batten and a great tune from Dangerous. Also included are selections from Prince, Living Colour, Spaceways Incorporated, Billy Martin & John Medeski, David Sylvian & Ryuichi Sakamoto, We Are Frank Chicken, Jeff Beck, Jeff Parker and Jeff Tweedy!

"I love you baby, but not like I love my guitar"

Between being abused as a child, sacrificing his childhood for work/career and then becoming rich beyond reason, MJ obviously had issues not many others can fully appreciate. It's a shame. He was a talented guy.

Well said Willard. I do not think that anyone could understand that kind of pressure. Thanks for the note.