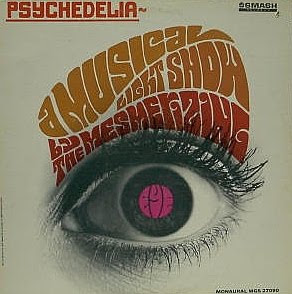 Behind The Lead Curtain Volume 2

The next 4th Anniversary special answers another frequently asked qustion - "what is the background music/audio collage that is heard behind all the breaks on RFW?". The answer is Psychedelia - A Musical Light Show by The Mesmerizing Eye. This 1967 release on Smash Records was produced by Larry Goldberg and Hank Levine and is more a one-shot acid-exploitation effort than a legitimate band release. After experimenting with many different sounds and styles, this hit the nail on the proverbial head and has been a RFW mainstay for several years. I thought it would be extra-groovy to play it for you without me talking over it for once!

In between the sides of our feature presentation, we take a Journey To The Centre of The Eye - a classic slab of early 70s prog from Nektar. They were an English band based in Germany who created some of the era's most memorable sounds. I was lucky enough to catch them live in Septemebr of 1974 at the Academy Of Music in New York during their first US tour.

Eye hope you enjoy the show!

"although my eyes are gently weeping, I know my world is coming to an end"

Just wanted to say thanks for RFW.

For you and your listeners:
http://aboombong.bandcamp.com/album/amnemonic

Thanks for the kind word - your ears are appreciated!

I will check out your blog today.

I love your site! Its great. Would you be able to please re-up The Mesmerizing Eye as the link is dead. Would love to hear it.

It's my pleasure, Nik. Thanks for your ears! Keep in touch!
Dave RFW